On August 22nd, 2019, Antonio Galloni released hisannual report on Chianti Classico, this year writing with such vigor that the globally respected critic could hardly contain his enthusiasm; “I can’t remember the last time I was this excited about Chianti Classico and its wines,” was the line gripping an introduction into what would prove a memorable account of the present and future of one of Italy’s most notorious and beloved winemaking territories.

After a notable visit to Castello di Ama in Gaiole in Chianti in July, Galloni’s review of the estate was marked by a single word: exceptional. The “memorable edition” of Ama’s 100% Merlot L’Apparita proved the most noteworthy, rewarded with an unprecedented score of 100 points, and denoted as “[one] of the most majestic, viscerally thrilling wines I have ever tasted here.” Lasting words for one of the designation’s most historically admired wineries, a story of success in the hands of owner Lorenza Sebasti and longtime winemaker Marco Pallanti.

L’Apparita, in many ways, tells the story of Pallanti’s career. He arrived at Ama in 1982, working alongside the legendary Patrick Léon, chief winemaker of Château Mouton Rothschild at the time. Under Léon’s guidance, Pallanti found a mentor as well asa passion for the French savoir-faire both in the vineyards and in the cellar. Apparita – in true French style – is a name likened to the land. At an altitude of nearly 500 meters, the precious parcels that go into this wine lie at the very top of the Bellavista vineyard, from which you can see (or, as they say in Tuscany “appare”) Siena. The vineyard spans just under 3 hectares and was grafted to clone 342 of Merlot between 1982 and 1985 – Pallanti’s first 3 years with Ama. Formerly studied in philosophy and rigorously passionate about contemporary art, Pallanti is a oneof-a-kind guru of his trade.

He is one of the most widely respected oenologists of the region, in which there is no shortage of top talent. “When can a work of art claim to be finished? When every single, small addition adds up in such harmony that it becomes perfect. Nothing more could be added or subtracted. Wine is the personification of a sentiment. It is simply a matter of love and sensibility: knowledge converted to passion. I couldn’t be more honored that one of the best journalists in the world has found my wine to have reached such a level of perfect equilibrium, the very balance that I have soughtevery year as a winemaker.”

L’Apparita was Tuscany’s first pure Merlot, a study in cru grown on soils of clay and fermented in stainless steel and barrique, half new and half first-passage, for 15 months. One could surmise that Marco’s affection for Bordeaux finds an homage in L’Apparita. As Van Gogh would explain: I dream of my paintings and then I paint of my dreams. In this case what is “seen and felt” in the glassare the legendary hills of Chianti Classico. 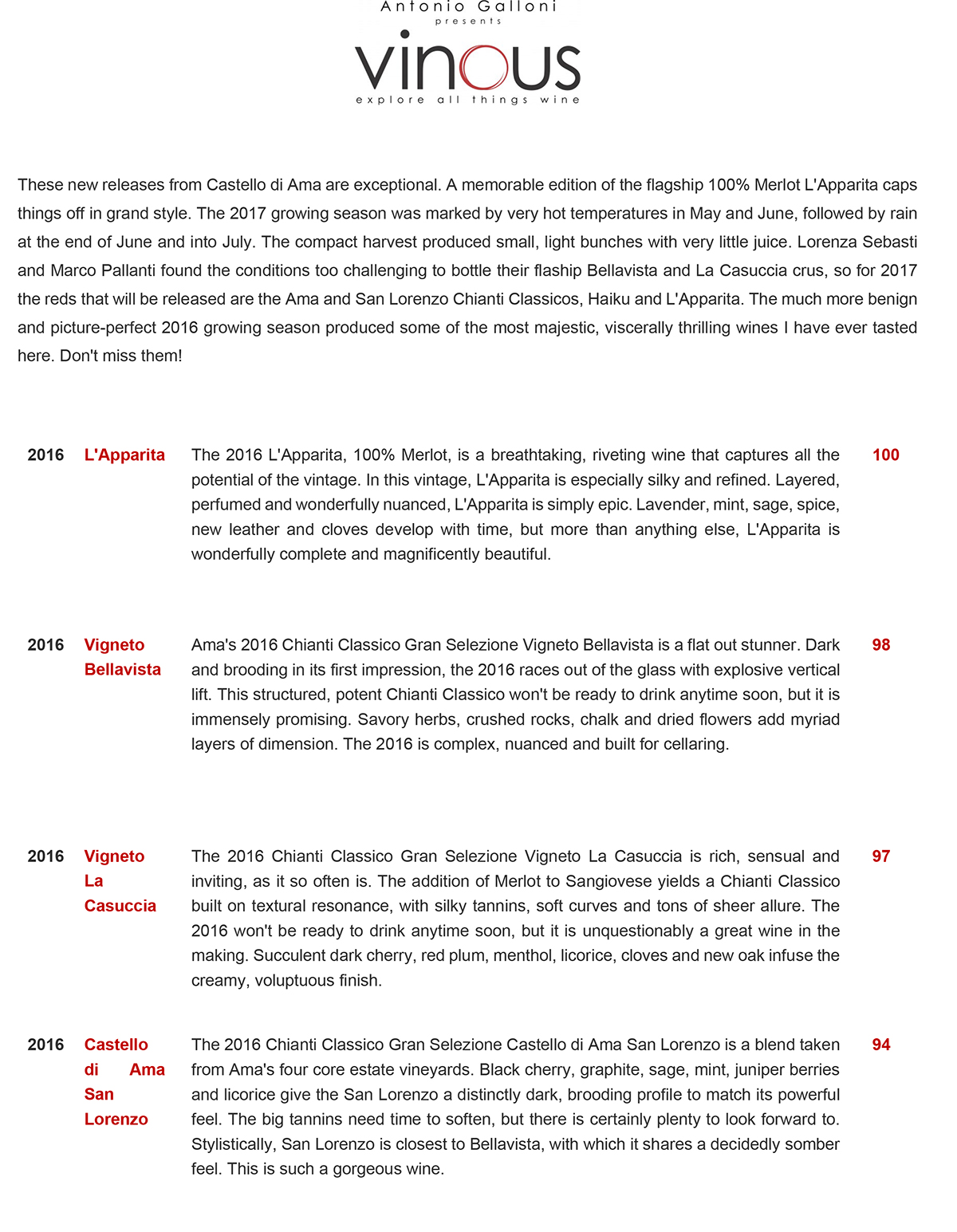 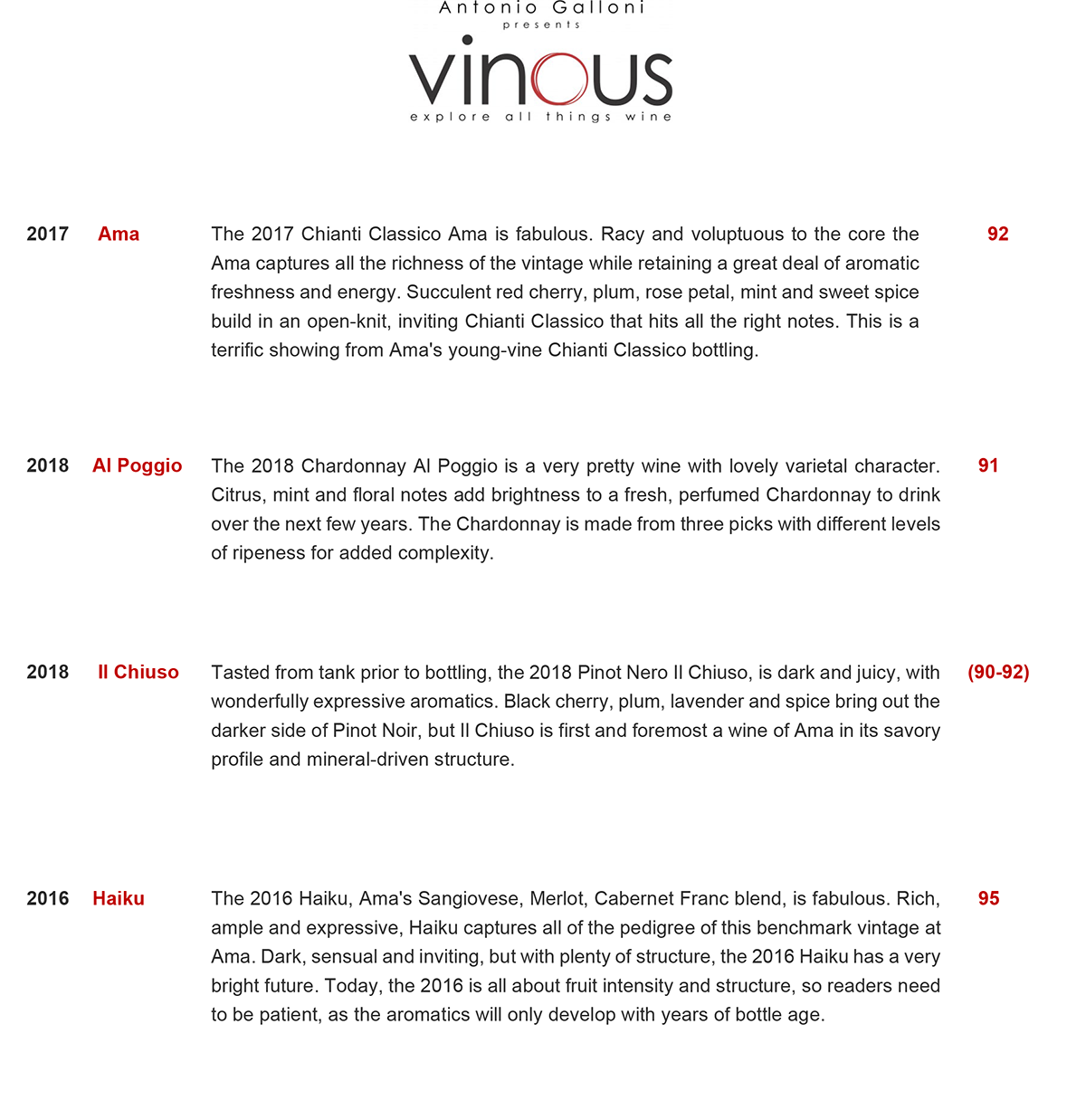