THE VISION
art in dialogue with the genius loci

In 1999, in collaboration with Lorenzo Fiaschi and the Galleria Continua, the Contemporary Art project began. Since 2015 Philip Larrat-Smith has been appointed curator, actively contributing in the choice of artists from all over the world.

In fact, it was clear from the very beginning that this place was also able to speak to the hearts of the artists, to touch their sensitivity, and – through the genius loci – to open the horizons of knowledge, trying to reconnect the past with the future.

The genius is, in Greek philosophy, a divinity who represents all generated things and, at the same time, is capable of generating them. St. Augustine defines genius as "the inventive and creative talent", but it will be Kant who will give it a much more detailed definition in his 'Critique of Judgment': "the talent to discover". The genius is the one who has the possibility to find: it is not necessary for him to know, but he must be able to produce something masterful, that is: reference for everyone. 'Genius' is nothing more than the ability to create original things given by nature to man. The addition of the genitive loci defines the specific genius of a place.

Terroir, on the other hand, is the term, used in oenology, which defines the uniqueness of a wine. Graphically, it is represented by a triangle whose vertices are the soil, climate and variety and at the center of which is man. Not all wine-growing areas are equipped with terroir, and a vineyard without terroir is like a deconsecrated church: it seems that nothing is missing, but in reality the most important thing is.

Being in Ama, listening to their stories, breathing in the air and drinking their wine: this is the best way to introduce ourselves. And this is how the artist ends up being fertilized by the genius loci - just as has already happened to the winemaker with the terroir - and creates something masterful, unrepeatable and specific for that place.

Here and nowhere else. 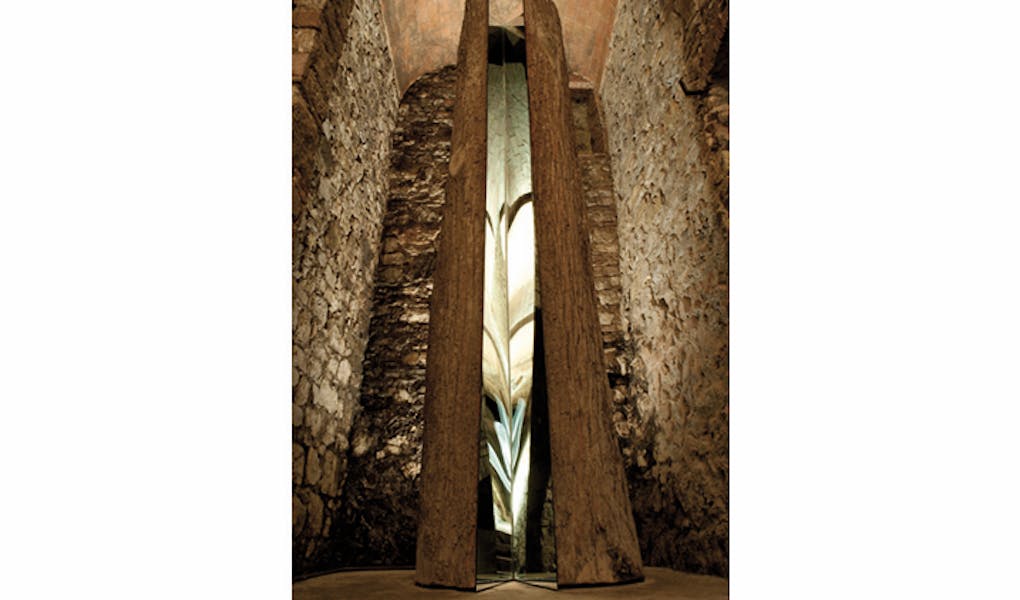 [...] From the main entrance of the venerable cellars of the Castello di Ama, we can see a great trunk standing at the end of the staircase. Inside a fissure in the roundness of its trunk has been inserted a mirror (a sort of lesion), cut in various angles so as to produce different refracted images. Michelangelo Pistoletto confronts us with a powerful and synthetic image, a work on the dialectic between the unity and division of the mirror. [...] 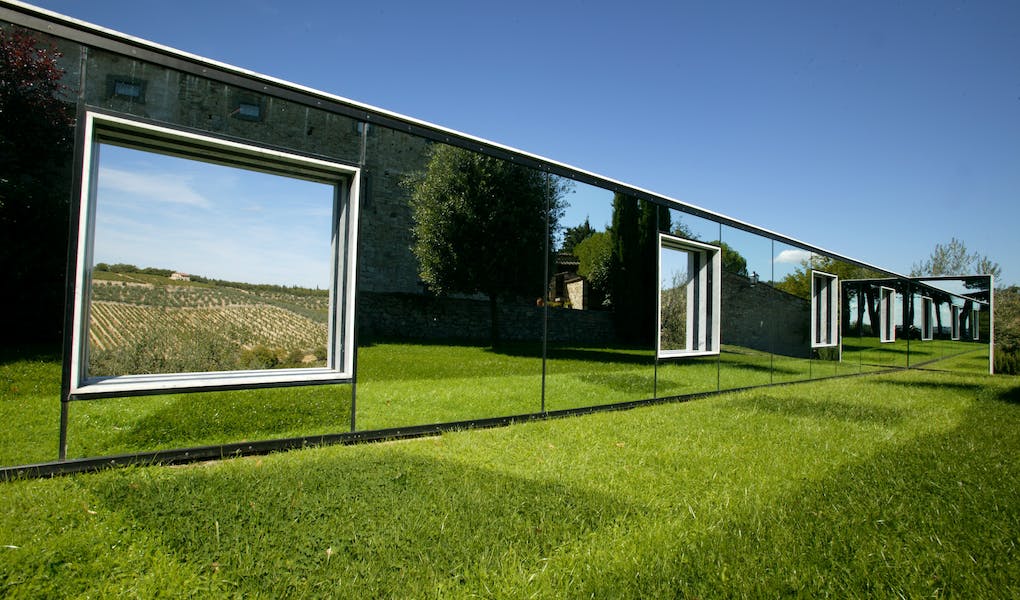 [...] There is a representation at the Castello di Ama as well, or rather an instrument through which something is represented. A wall twenty-five metres long and two metres high has been built in front of one of the buildings of the castle complex in order to close off the view of the surrounding countryside, but at the same time to open it up in a very particular way. The wall is dotted with square windows that frame and thus emphasize the beautiful landscape of the valley, thereby re-elaborating the tradition of “landscape painting” but also the equally habitual notion of painting as a “window” onto the real. [...] 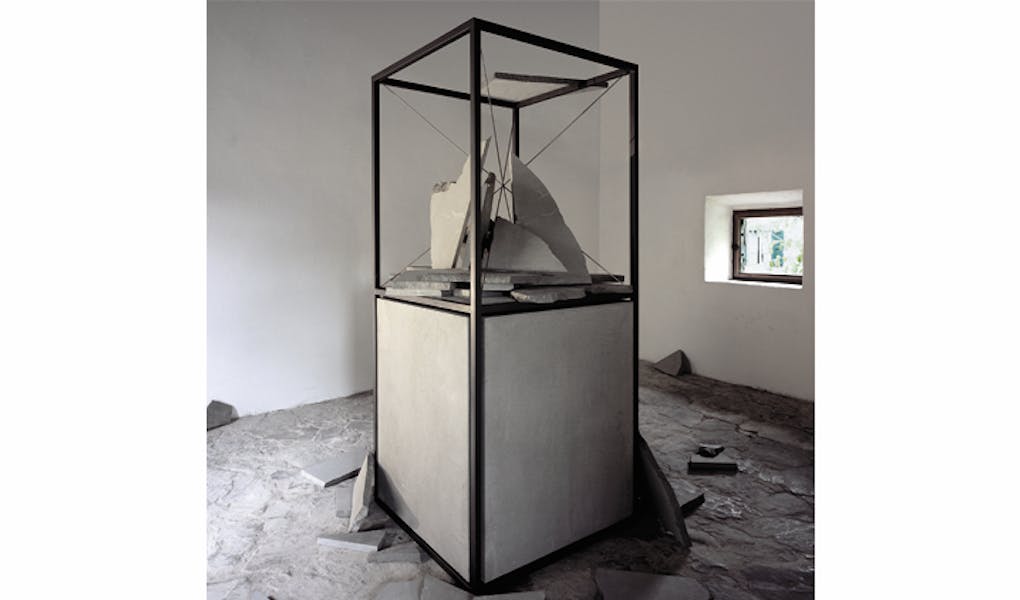 [...] Paradigma is a parallelepiped of stone slabs in a metal frame, in which can be seen two equivalent parts, one on top of the other. The lower part is closed and impenetrable to the eye, opaque and solid; while it is as if the upper one has exploded, disseminating fragments everywhere – on the framework, which is visible and open to view, and in the room where the sculpture is sited. The contrast is very clear-cut, and indeed it is precisely for this reason that one sees more clearly that the slabs forming the faces of the lower section are in fact a little set in from the frame, as if they were imploding. [...] 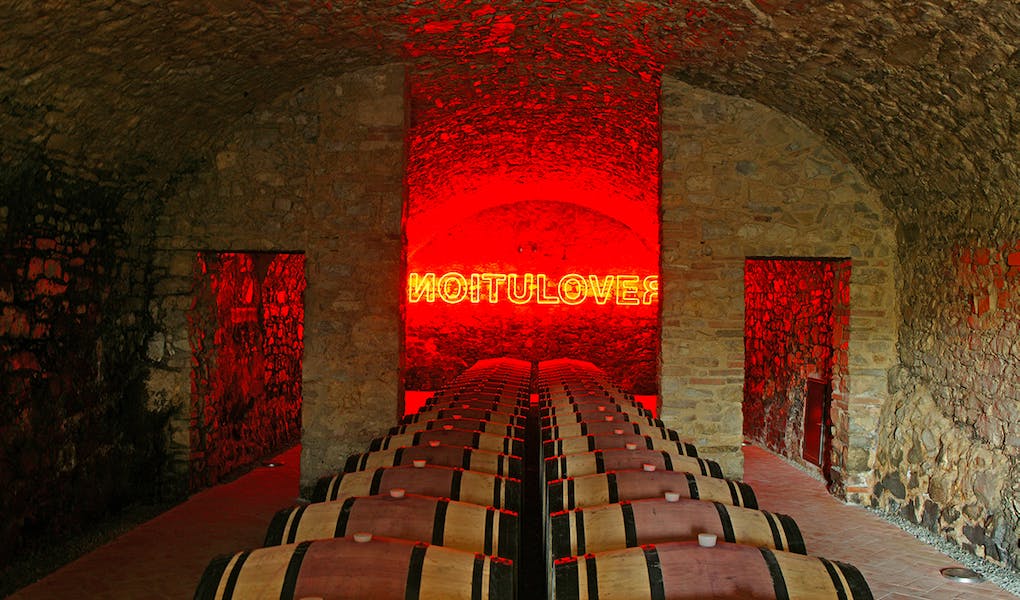 [...] The fact that the NOITU(LOVE)R was conceived for a wine cellar emphasizes on the one hand the specific transformation of wine and, on the other, highlights the everyday revolution we all conduct at home. The fact that this wording is set in a room evocative of a Romanic crypt, red like a primary colour, but also red like blood, points us in the direction of Geers’ research. [...] 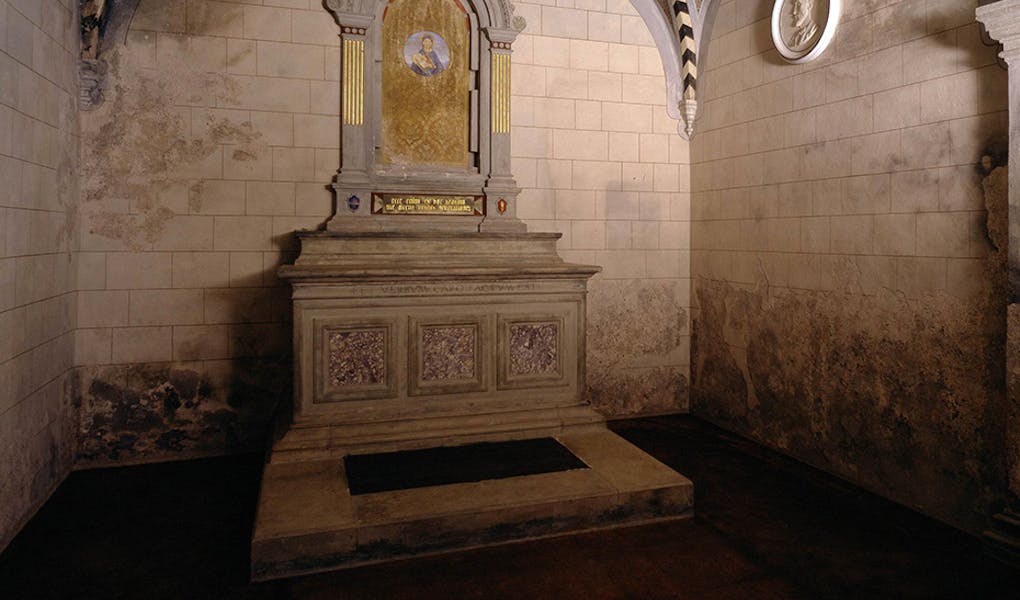 [...] One of the costants in the work of Anish Kapoor is the creation of openings on the crust of the world. In the chapel of the Castello di Ama, a bright circle opens in the centre of the paving, a small, flaming chasm. Fire and light. A precious substance, as indefinite as it is beguiling. So what are we dealing with? What has destiny placed on the path of our ordinary, absent-minded journeys? What is its necessity, if there is one? [...] 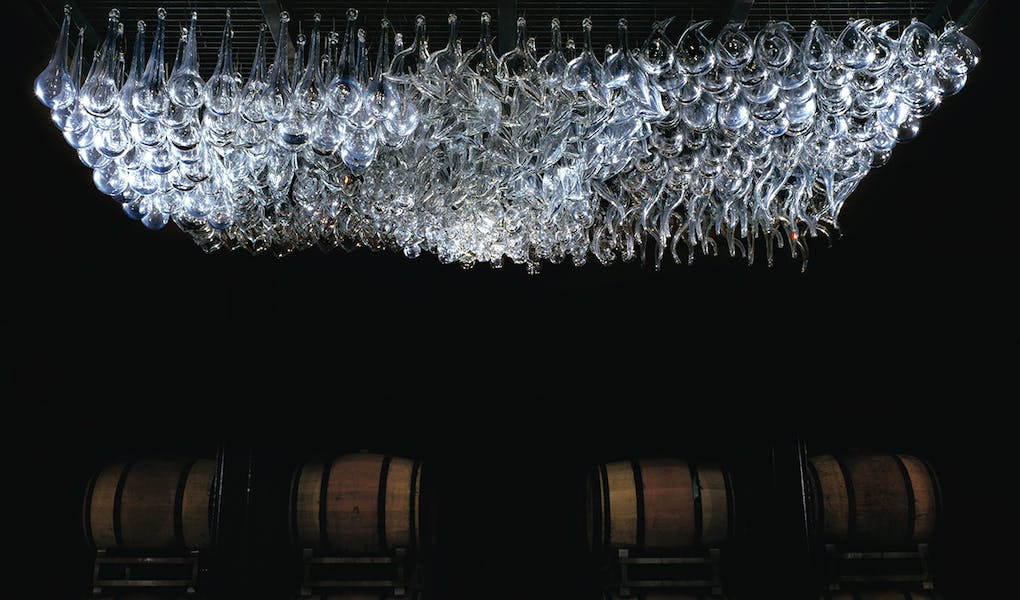 [...] What I mean by leaving your studio is going to the real world, plunging deep into the inner layers of life. A site is not simply a space to work in, but it is a type of life. Once a friend of mine asked me, what was it like when I reach the most exciting moment and status in my creative process? I said, it was like the “short circuit” phenomenon in electricity. [...] 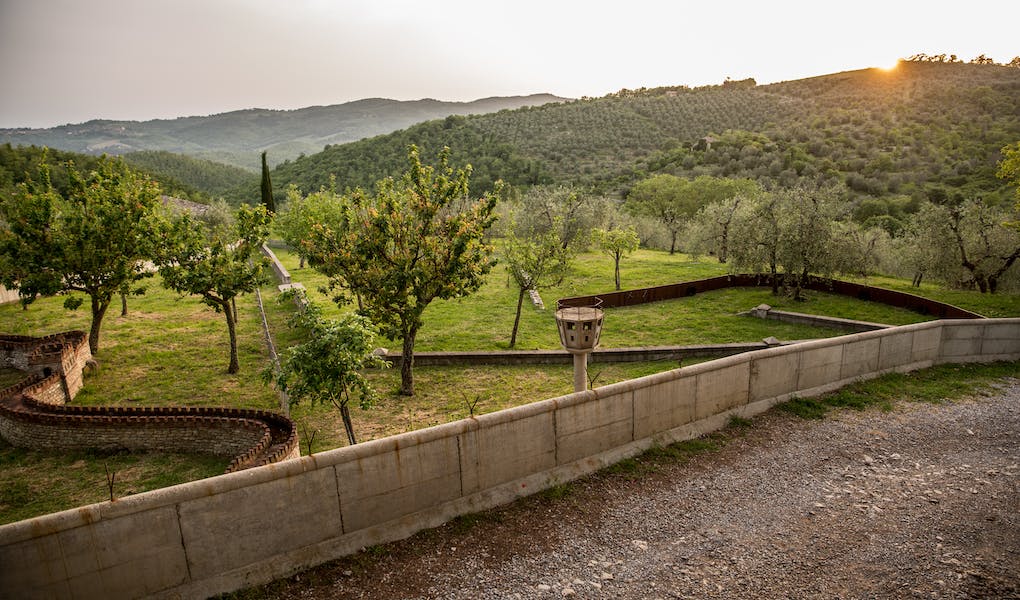 [...] Here in Tuscany, in a landscape imbued with history and culture, in a place where ideas, stories and images are exchanded and produced, Carlos Garaicoa presents some of these walls, new and old alike, in a reduced format that enables us, if we so desire, to clamber over them with ease (almost inviting us to think that all the limits are constructed in order to prompt us to overcome them), but which nonetheless make their presence, and the force of the motivations that created them, felt very strongly. The strident contrast between landscape and installation is evident and at the same time arouses admiration and wonder – as, one might add, do all of Garaicoa’s works. [...] 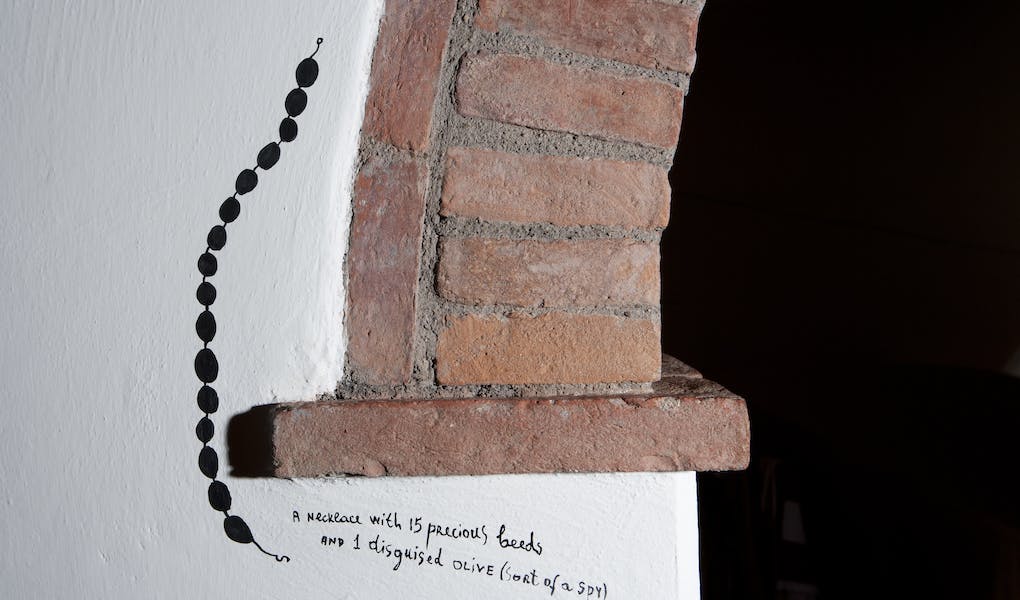 [...] Brief stories, aphorisms, comparative descriptions, word plays and semantic double meanings, all written out in empty surfaces of museums, exhibition spaces and other public meeting places. These writing form a host of narrative rivulets, at times realistic and at times surreal, sometimes didactic and sometimes farcical, giving rise to an inexhaustible chain of associations of ideas that involve the viewer directly in the creative universe of the artist. [...] 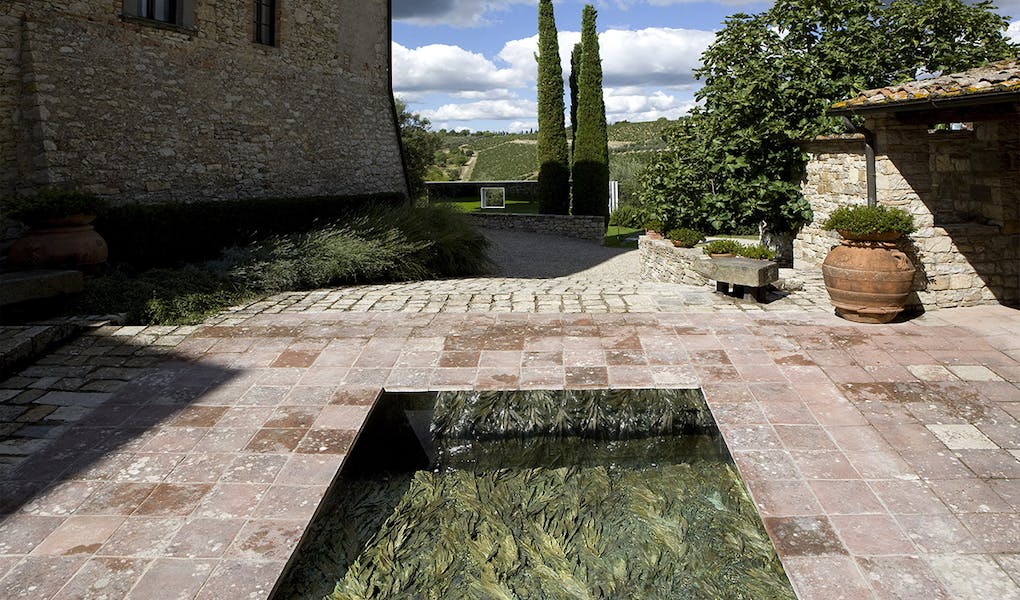 [...] The basin of Iglesias’ fountain, on the other hand, fills up slowly, silently and cyclically. In the space of a little over an hour, the water level rises as far as the edge of the basin, at ground level, remains there for several minutes and then slowly begins to drop as the basin empties. Iglesias also quite naturally erases the boundaries between the rigidity of an installation and the transience of an intervention. It is what Umberto Eco describes with the concept of the “open work”, where the addressee or viewer is ascribed the active role of completing the work through its reception. [...] 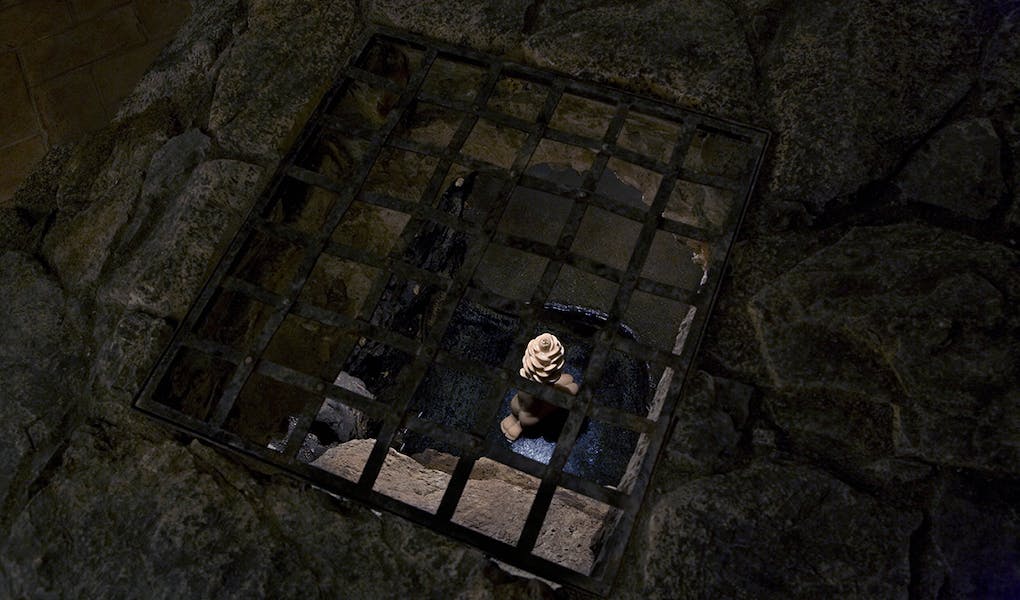 [...] The new work for Castello di Ama offers a moment of total synthesis: a piece of pink marble in a state of ongoing self-fertilization, a female figure turned into a blossoming phallus. Bourgeois has chosen a hidden and dark place, and she built her own vertical figure inside this wet place. [...] 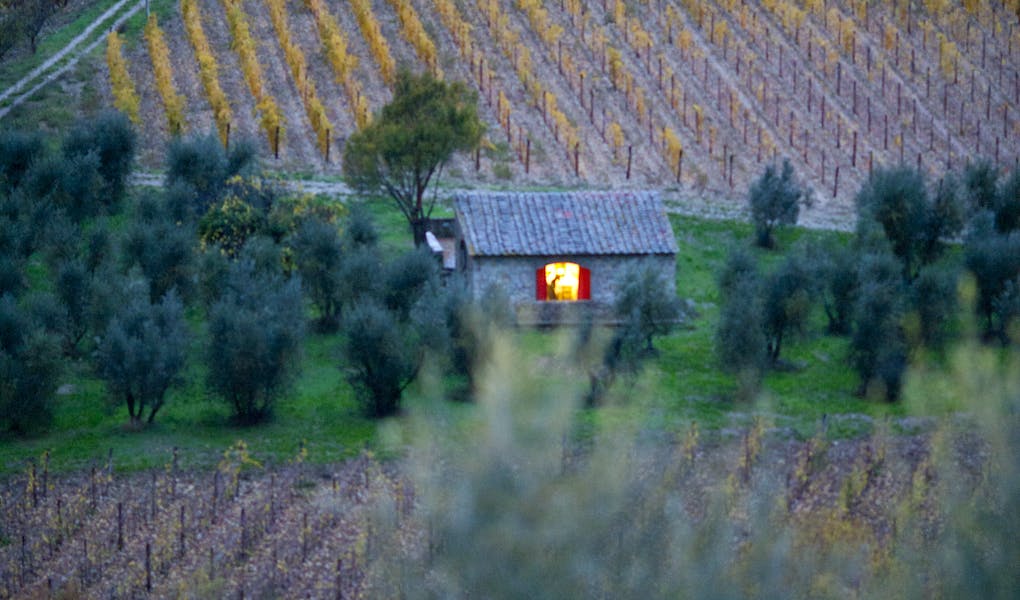 [...] There are people and… angels there sitting around a table; they do not expect our gaze, they are angelically calm. Maybe they have walked over from a Renaissance painting; maybe they are the kind of people Kabakov has met in his life: “guides who are pushing the train of fate in the needed direction”  One has to look again through the telescope - are they still there? It’s hard to believe in their existence; very few are chosen to see them; this might only be possible in the area of Castello di Ama where the “guides” are coming back by force of habit to mingle with artists…[...] 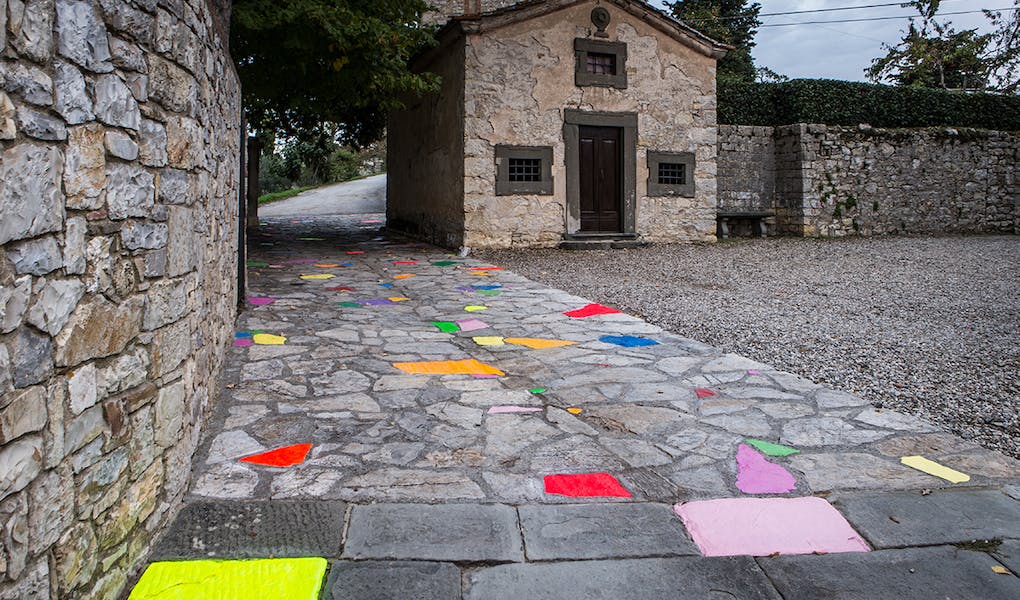 [...] Pascale Martin Tayou is guided by his senses at Castello di Ama. He progresses and recalls past moments, friendships and people he has encountered. It concerns the human being and its ability for wonder. Pascale Martin Tayou wishes to sow something: patches of colour, like in a kaleidoscope, which will sparkle beneath our feet; patches of colour which will splash the path and be part of the ground. Colours and light: there is still time to enchant the world. [...] 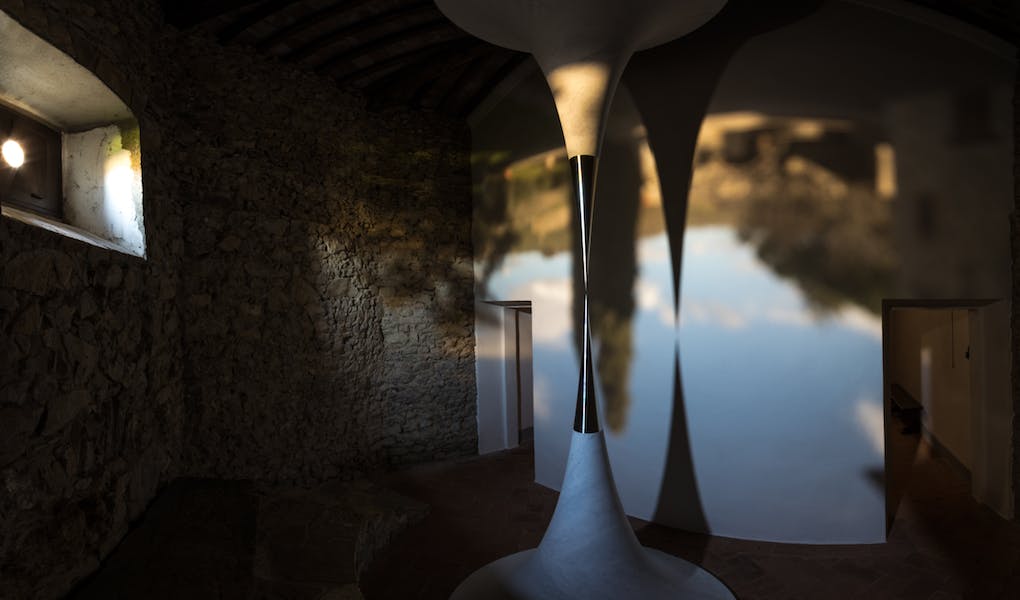 [...] Sugimoto’s choice of a hidden place behind the scenes is of a piece with his penchant for demystification, for pulling back the screen on the technical mechanisms and mental operations that generate the iconography in whose reality and accuracy we all too often repose a blind faith. The aperture set in the small window on the rear wall converts the sacristy into a camera obscura, which looks back to the earliest days of camera-less photography. [...] 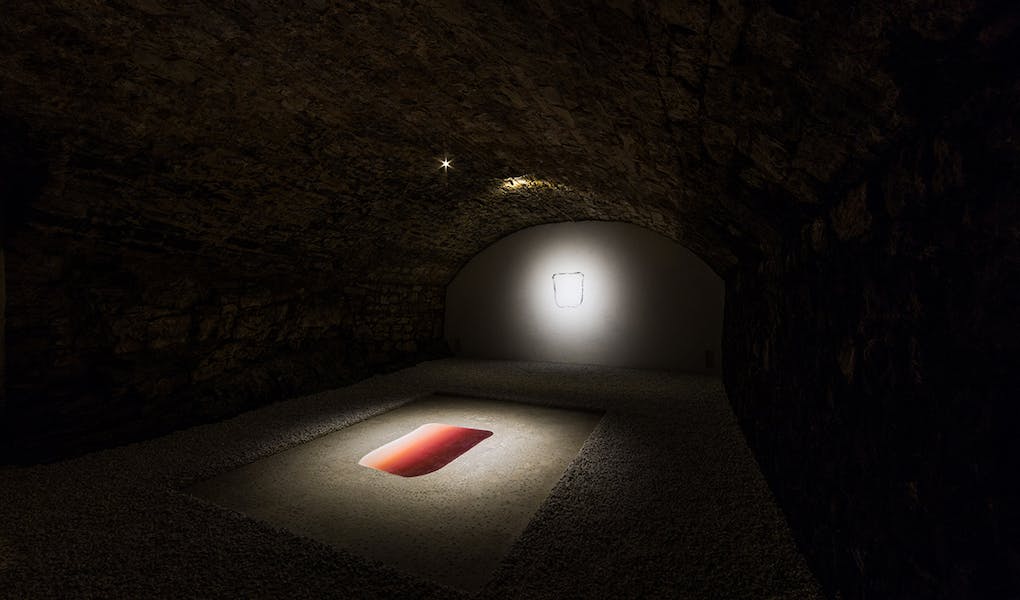 [...] As the subtitle implies, the floor painting is intended to look as if it were excavated from underground, as in an archeological dig. The hand-painted shape on the floor is thus presented not so much as created but as discovered. [...] 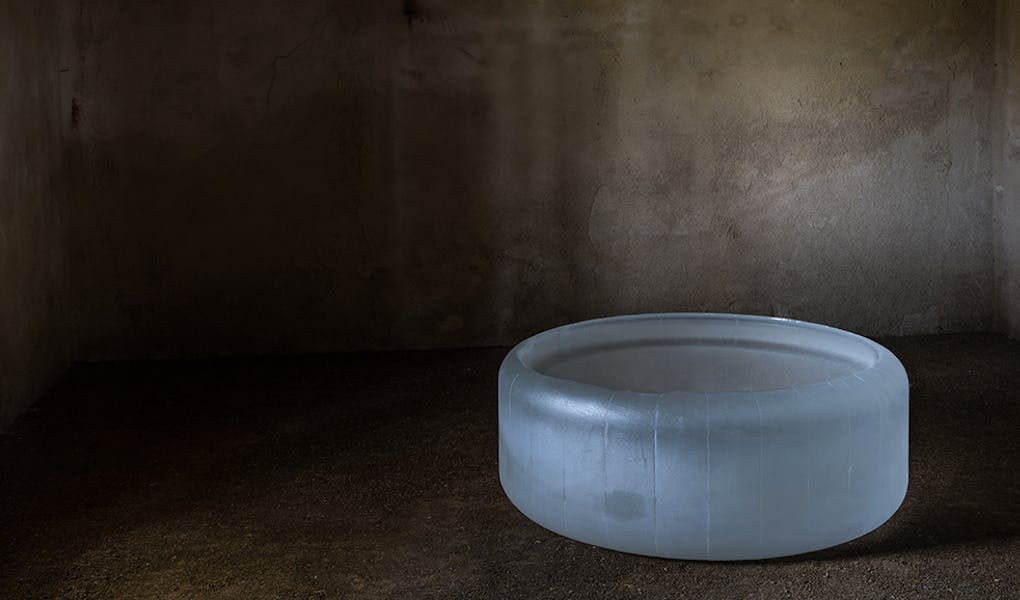 [...] In Untitled (“One can recognize…”), Roni Horn has sited a round glass element in a rustic room tucked away in one corner of the Villa Ricucci. The artist has staged an unmediated encounter, precisely scripted yet metaphorically open, with the inherent properties of her chosen material. The sculpture embodies the paradox that the more transparent something is, the more mysterious it becomes. [...] 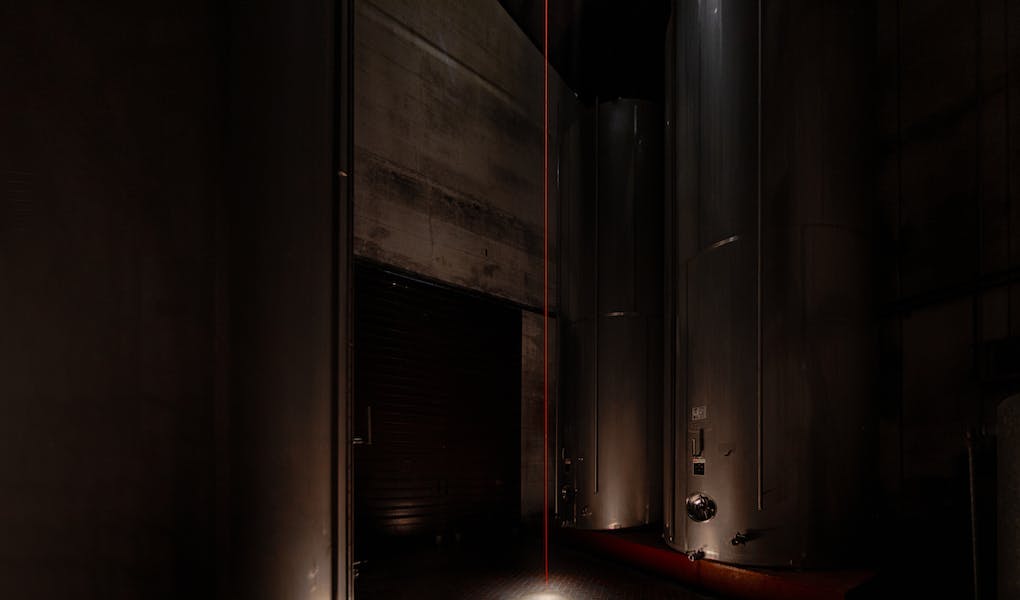 [...] As the title implies, the thread is a metaphor for the human body, like a vein or umbilical cord that sustains a fragile and tenuous existence in the surrounding darkness. There is a spiritual dimension as well: the thread spanning the extreme height of the cantina metaphorically links earth and heaven, the visible realm of concrete things and the invisible realm of the spirit. [...]